Marcus Law (マーカス・ロウ, Mākasu Rō?) is a lieutenant of the Hellsalem's Lot Police Department, and is the younger brother of Daniel Law.

Like his brother, Daniel Law, Marcus is a man with brown hair and bangs that covers his right eye, the opposite of his brother, which covers his left eye. He wears a blueish (depending on lighting, appears green) tie, brown suit, and tan trenchcoat.

The only thing that stood out is that Marcus is very cautious and have firm leadership skill.

He is put in charge of the police station during the realization of the auction for the Charops Jinko after his brother Daniel is put under domiciliary arrest for having part of the blame for the destruction of the Noctova Smile.

Right after the chaos caused when the Charops Jinko’s contents were released during the auction, Marcus goes to see the survivors of the specials op team sent by the US government that fighted with the Tycoon Brothers in an attempt to secure the vase. Marcus tells him he witnessed Klaus' group defeat a Blood Breed before, so imprisoning him was a mistake.

He has the resources of the HLPD. 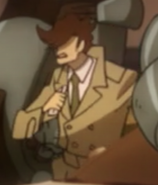 Add a photo to this gallery

Retrieved from "https://kekkai-sensen.fandom.com/wiki/Marcus_Law?oldid=11522"
Community content is available under CC-BY-SA unless otherwise noted.